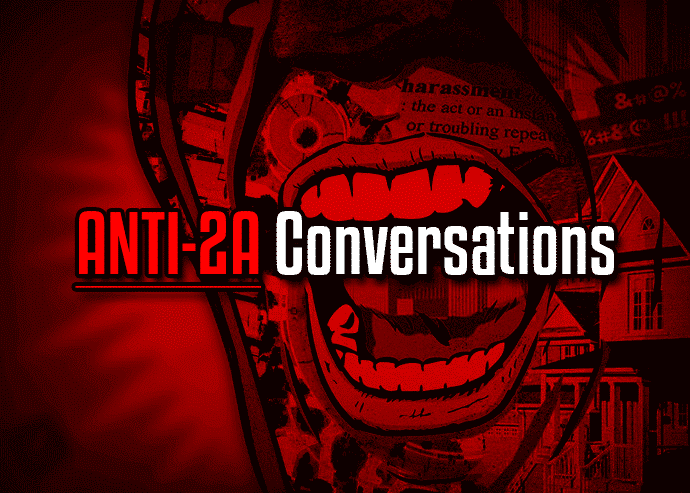 How to reach your liberal friends:

I was at a party a
few months back, and my kiddos were running around and playing. One of them ran
into me and yelled out ouch, not remembering that I carry a gun everywhere,
because bad things can happen anywhere. The host of the party, who is of
somewhat familial relations, looked almost in terror because he saw everything and
was in shock that I would carry to their party. What followed was a discussion
that you can have with your family or friends and be an ambassador for the
“armed and polite society”.

This is the first
question I usually get, and its typically followed up about the safety of the
place, questions on my manhood, or other variations. First off, not worried
about my manhood, so let’s set that straight. Second is I always answer if they
have a first aid kit (most don’t), a fire extinguisher in their kitchen (even
more rare) or know how to change a tire (rarest of all). The point to discuss
is that you are sure that the place/event/venue is most likely safe, and that
you don’t think anything is going to happen, but just like those above items
you want to be prepared if they do. You can recount many places or times that
people went into a movie theatre, a restaurant or a dark alleyway and didn’t go
there looking for bad things to happen, but they found them. I carry not for
me, but to protect my wife and kids if they are with me.

This bit of
ignorance was from a very staunch anti-2nd amendment spouting that
guns kill people. A gun is a tool, like a hammer, a car, a baseball bat, or a
knife. All have the capacity to end human life, and the those mentioned above
kill a LOT of people every year. Personally, my favorite argument is
technically fast food kills more people through cancer and heart disease every
year, why are you not boycotting them…this is about the time that the
overweight challenger storms off after yelling obscenities. Bottom line is I
reiterate I am trying to protect my family and myself. I don’t know if there is
going to be one person or three, if they are armed or if they are on drugs. It
is an insurance policy to even the odds.

“Just call the police if there is an issue”.

As I wrote in another blog, I had an incident with a person
who was drunk and firing a weapon on the side of the road, at night, and he was
aiming over my house. Based off the current events at the time, I didn’t want
to engage though I could have legally because I didn’t need my face plastered
in the news. I called the police, and they heard the shots. It still took them
7 minutes to get there. They came in force, as did my neighbors who showed up
armed (love country friends) and he was apprehended. Seven minutes was plenty
of time for him to assault my house, pose a threat to my pregnant wife, kids, brother,
and myself, and cause significant damage. Also, you may not be in a spot to
call for help (like they are robbing you of your phone, or you are out of cell
service).

The biggest thing you can do to change an anti-2A persons
mind isn’t words, it is to take them to the range, or sit and have a
conversation with them. Many of them are scared of the weapons themselves, but
they haven’t had that person to teach them. To empower them to protect
themselves instead of being a victim. I would encourage all of you to have that
debate and to be the change we need, not just talk about it.