What Happened to Joe Biden’s Vision? 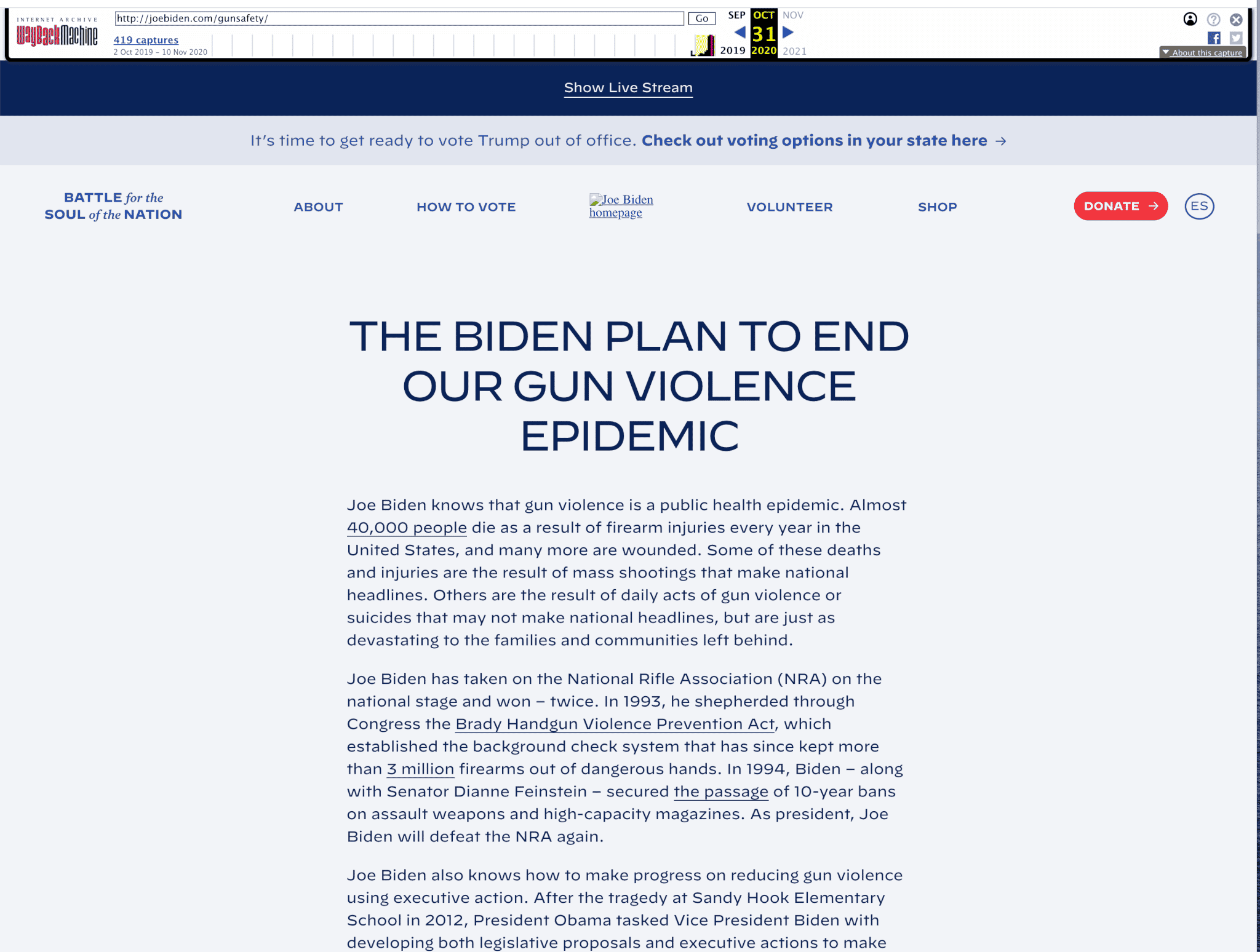 A little over a week has passed since we voted
in the 2020 Presidential Election. Before November 3rd, the only thing that
everyone could agree on was that the count would take longer than any prior
election. There was also a consensus that the courts would play a large role in
determining if voting officials followed state and federal law.

The President has filed court cases in several
states contesting the constitutionality of last-minute changes to voting laws
in Pennsylvania, vote count ‘glitches,’ and many federal voting law violations
in several other States. Currently, there are over 150 affidavits from
witnesses who claim to have personally seen voter fraud take place.
Additionally, and not to be overlooked, is the fact that the DOJ is
investigating claims of voting irregularities and manipulation.

Nobody knows what the outcome will be, but at
the moment, with Joe Biden leading, there is a strong possibility that Joe
Biden may be the 46th President. Should gun owners worry about a Joe Biden
Presidency? I thought I would head back over to his official website and see if
his pre-election promises on gun control had changed. We all know that
politicians make promises to groups to get votes and then sometimes take a more
moderate stance on the issue. It’s hard to imagine, but would Joe do the same
thing on gun reform?

As I did before the election, I went over to
www.joebiden.com. Unfortunately, Joe’s website no longer lists his vision for
anything. Instead, there is a lengthy statement that one could describe as an
acceptance speech to winning the presidential election. Pulling from Politician
Speak 101, he promises to be a unifier and healer of the country. But his
vision on how he will accomplish this monumental feat has disappeared.

Perhaps Joe’s destructive and wild vision for
the country that indicated on his website was only to garner the vote of the
extreme in the party. Now that the election is over, Joe can toss those nutty
ideas to the side and put on his ‘great unifier’ cap. This is not the likely
reason, as the Democratic party is moving further left. Democrats who won House
races across the country are not moderate; they are the ones who support
far-left policy. Those supporting more moderate policies lost to
Republicans.

It is more likely that it is hard to sell a
unifying message to people while at the same time promising to turn millions of
them into felons overnight. If you’re a gun owner and didn’t get a chance to
see what Joe had in store for gun owners before he pulled his vision from his
website, fret not. There is a cool website called Wayback Machine www.archive.org that allows you to see what a website looked like years or days in the past. It
is always best to get the words directly from the person, or in this case their
website.

Below is the abridged version of Joe’s gun
reform plan. You can check out the archived version here:

Pretty ambitious, no? It would take hours and
hours to address the individual planks of the agenda. Needless to say, they are
extreme, unconstitutional, and would have horrible effects including higher
crime rates.

This is the gun reform agenda that people voted
for. The media does a great job of framing the election as some sort of
popularity contest. A referendum on the character of Trump and Biden. But we
vote for an agenda, a vision, not a person. This is just one part of the agenda
that is Joe Biden. And because what the candidates stood for seemed to be
unimportant, many didn’t pay attention to the trainwreck that is Joe Biden’s
vision for the country. We thought it would be important to illuminate just a
piece of that agenda.