The Dangers of Slamfire 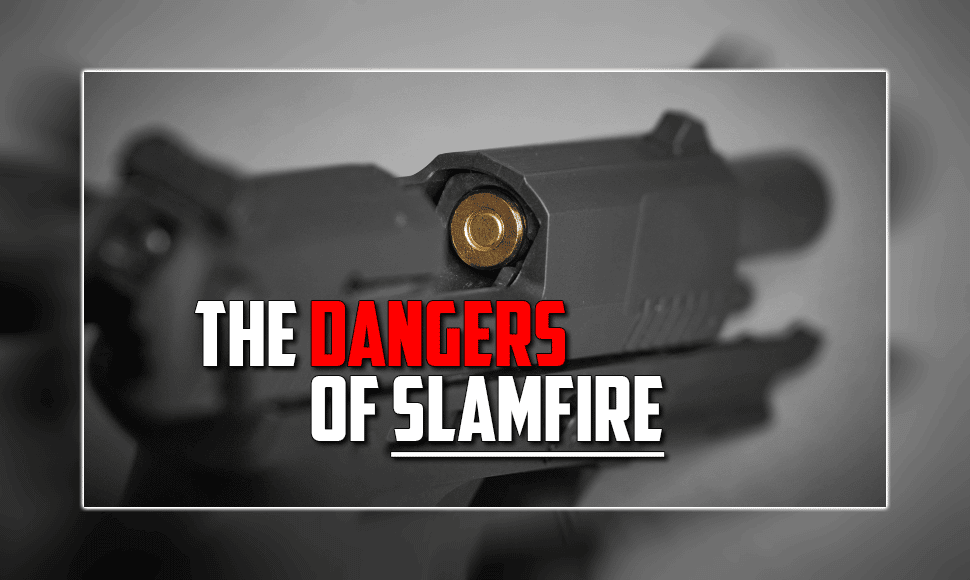 I was recently at a sporting clays course with two friends
and a new acquaintance partaking in some fellowship and much-needed target
practice. It was a balmy twenty-something
degree, with the sky having a bright steel color, and I entirely blame my sub-par
score on the cold weather. The particular course we went to is one of the premier courses in the country,
nestled away in a quiet Pennsylvania town.
The asphalt-paved path was well suited for our loaded-up golf cart and
winding its way through the acres of the shooting oasis as if we were
transported to the countryside of Old York.

Being one of the top facilities, they have a fancy all
electronic target system that utilized a card reader that kept track of the
number of targets thrown. It allowed the appointed puller to activate remote
buttons, sending targets out at each particular station. Even though we are all firearms instructors,
we still had a brief safety talk to ensure we were all aware of the rules.

It was a lovely morning, and we all fell naturally into our
roles without much discussion. One shooter gravitated to keeping score, one shooter stood in the bullpen, I took
to the card reader and remote, and another shooter stepped into the box. We rotated out positions as needed but
essentially kept a consistent cadence throughout the day. After we finished at a station, we picked up
and disposed of our spent shells, hopped into the golf cart, made sure everyone
was ready to go, and we “Tally-hoed” our way to the next station. We meandered the course puffing away on large
Churchill cigars, just taking in the day.

At the third or fourth station, we were all somewhat
fortified in our roles, and I was positioning myself with the remote as a
shooter got ready. Not hearing pull or any
call for a bird, there was a loud “bang.”
I put the remote down and asked, “What happened?” The shooter closed the action on his
side-by-side double-barreled shotgun while loading it, and it went off. He had a slamfire.

What went wrong? What went right? What can we learn from this?

First and foremost, no one was injured. The shooter was in position at the station
with his firearm pointed towards the target area. When he closed the action and the gun went off,
it certainly surprised us all, leaving us gobsmacked, but no one was hurt, and
there was no property damage. This incident
was a prime and perfect example of maintaining proper muzzle discipline. The shooter had his firearm pointed in a safe
direction, and we were no worse for the wear.
As far as any parliamentary procedure could go, the situation was brilliant.

The only thing that went wrong was that my buddy’s shotgun
decided to let out the magic that particular day. We talked about the prominence of the gun,
and it had some age to it, with him having procured it used. That day was its day to malfunction and
resulted in a trip to a gunsmith.

What went right was that everyone reacted and acted appropriately.
We followed the proper safety protocols,
there were no injuries, and there was no property damage.

What we can learn from this is an excellent question.

For starters, following all the gun safety rules, regardless
of which camp you subscribe to, works.
Keeping the firearm pointed in a safe direction, never pointing a gun at
something you do not wish to destroy and treating all guns as if they are
loaded will keep you from having a tragic event unfold.

The second thing to glean from the scenario is that a
competent gunsmith should do regular checkups of your firearms. It is absolutely impossible to identify if a
part will fail and when. However, regular checkups and part exchanges will help
mitigate events like this from occurring.
Given the age and used nature of my friend’s shotgun, it was due for
some maintenance and not as trusty as ole Big Ben.

A third lesson that we can learn came in the form of how we
proceeded next. It was the beginning of
our day, and our friend was out of a shotgun.
This predicament was not a big deal. He could have easily used one of
the guns that another shooter was using or even gotten a rental from the pro
shop. But, we were much luckier than
that. One of our party members had
brought more than one gun with him, so there is a perfect example of why you
need more than one gun if you need to justify that sort of thing to yourself or
say a significant other. I jest. But there are some compelling arguments there!

The rest of our day went off without a hitch. We managed our way through the cold weather,
whacking, and missing clays from station to station. We stepped in time together as a squad, had a
few good laughs, and came home to our loved ones in one piece. It was the kind of day that would best be
capped off by some bangers and mash, followed by a thick draught of a tasty
beverage. Tally-ho!

John Petrolino is a US Merchant Marine Officer, writer,
author of “Decoding
Firearms: An Easy to Read Guide on General Gun Safety & Use” and USCCA
certified instructor, NRA certified pistol, rifle, and shotgun instructor
living under and working to change New Jersey’s draconian and unconstitutional
gun laws. You can find him on the web at www.johnpetrolino.com
on Twitter at @johnpetrolino,
and on Instagram @jpetrolinoiii