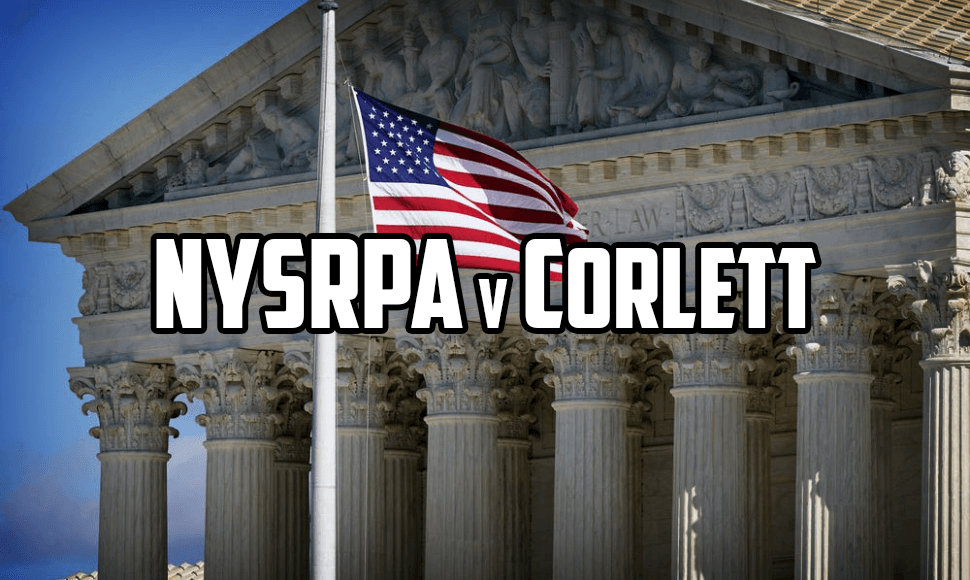 The news has been abounding with reporting since the recent
announcement that the Supreme Court of the United States has agreed to hear an
important case. The case in question is NYSRPA
v. Corlett and deals specifically with possession of a firearm outside the
home. There are some significant takeaways about this case being granted
certiorari, as well as some misconceptions.

The 30 second rundown on NYSRPA
revolves around New York State’s permitting for the carry of a firearm. New
York is one of the final hold-out states that still subscribes to “may
issue” permitting. That means that the issuing authority may or may not
issue a permit even if someone legally should be allowed to carry a gun. This
status is troublesome because many jurisdictions that have “may issue”
permitting abuse or flat out do not issue permits to everyday citizens. Several
lawsuits have revolved around this issue, with many making their way to the
High Court, only to be declined from being heard.

Some misconceptions are that the Supreme Court has not heard a case since the McDonald case in 2010. This assertion is
not true, as NYSRPA had a case that
not only was granted certiorari, but the High Court did hear the arguments that were being made last year. That case had to
do with people being foreboded from removing their handguns from the physical
area known as the five boroughs of New York City. The High Court eventually
ruled the case was moot due to a law change. The law change was on the State
level and offered the relief that was being sought. At least, that is what was
said. Was total relief provided with the State law change? In my opinion, no,
because there was no precedent set from the Supreme Court prohibiting similar
laws from ever coming into effect.

Another case that also goes unacknowledged is Caetano v.
Massachusetts. While the case did make it up to the Supreme Court, it was not
granted certiorari. However, what the High Court did do is remand it to the
lower court and have them re-hear it with specific instructions. The suit
involved Massachusetts prohibition on the possession of stun guns and tasers.
Eventually, the law was overturned. This was a Second Amendment-related case
and crucial for advocates of this right.

Many want to paint the Supreme Court to have not touched any
Second Amendment cases in over a decade. That would be false. What they did
intervene in had positive results. Sure, they have not heard a litany of cases,
having turned down nearly a dozen cases involving arms just last year, but what
we have gotten has increased our freedoms. That is what we want and is also vital.

This particular case with NYSRPA can have far-reaching effects. A thing to note is the
original question presented by NYSRPA was changed. The question was whether the
Second Amendment allows the government to prohibit ordinary law-abiding
citizens from carrying handguns outside the home for self-defense. The question
the Supreme Court agreed to hear is: Whether the State’s denial of petitioners’
applications for concealed-carry licenses for self-defense violated the Second
Amendment.

Some have said the change in what question the court is
willing to answer is a bad thing. Others say the narrowing of the question is a
good thing. Anything that ever involves speculation with the Supreme Court can
generally go out the window. We just don’t know what they think. I do, however,
side with the narrowing of the question being a good thing, as a positive
outcome for those seeking relief will not only get the relief they seek. This case
will also pave the way to topple the restrictive laws in New Jersey,
Massachusetts, Hawaii, California, Maryland, etc.

The case has made big waves with news outlets signaling that
“the sky is falling.” If the echo chamber of biased mainstream media
can be good for anything on this subject, is they are showing they are
frightened by the prospect this case is being heard. What will exactly come of
this case? Well, we’ll have to wait and see. It’s doubtful New York will take
any steps to try to moot out this case. If they do, the High Court will hopefully
intervene and say, “Fool me once, shame on you. Fool me twice. Shame on
me.” And still, render a judgment on the merits. Should that happen, and
the High Court lets them slide again, that’s okay. Nearly a half dozen other
cases are winding their way up through the system.

Keep your eyes peeled! We’re living through some exciting
times!

John Petrolino is a US Merchant Marine Officer, writer,
author of “Decoding
Firearms: An Easy to Read Guide on General Gun Safety & Use” and
USCCA certified instructor, NRA certified pistol, rifle, and shotgun instructor
living under and working to change New Jersey’s draconian and unconstitutional
gun laws. You can find him on the web at www.johnpetrolino.com
on Twitter at @johnpetrolino,
and on Instagram @jpetrolinoiii