Keep That Finger off That Trigger! 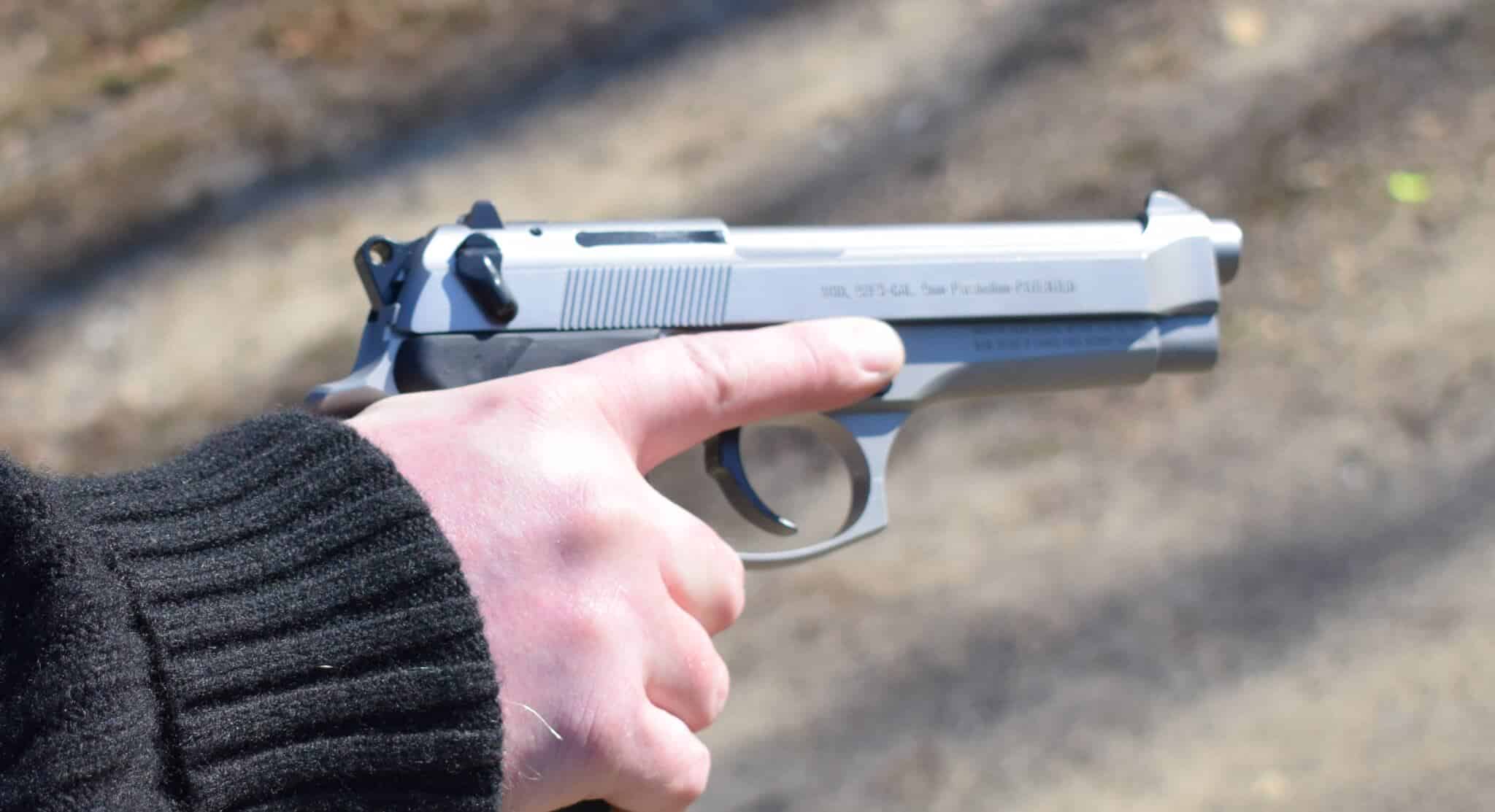 As firearm users we should all know the three NRA rules of
gun handling and the Cooper rules. For those of you who need a brush up or need
to learn them, let’s review.

All guns are always loaded. Even if they are not, treat them as if they are.
Never let the muzzle cover anything you are not willing to destroy.
Keep your finger off the trigger till your sights are on the target.
Identify your target, and what is behind it.

Derivations of and expansions on these rules have happened
over the years and the common thread between all of them that we’re focusing on
here is thou shall keep your finger off the trigger until you are ready to shoot
and your sights are on target. When
I work with students, I’ve learned to explain exactly and explicitly what my
expectations are concerning this important rule. For me, when I discuss the rule, I cover the
following by saying:

I was recently discussing this with another firearms
instructor, who has his own in depth thesis that he wants to write on the
subject, and something we agreed on 100% was the complete importance of
pointing out that the finger shall
be indexed to be considered “off the trigger”.

In the text of my book Decoding Firearms: An Easy to Read Guide on
General Gun Safety & Use I explain the no booger hooker on the bang
switch concept in this manner: 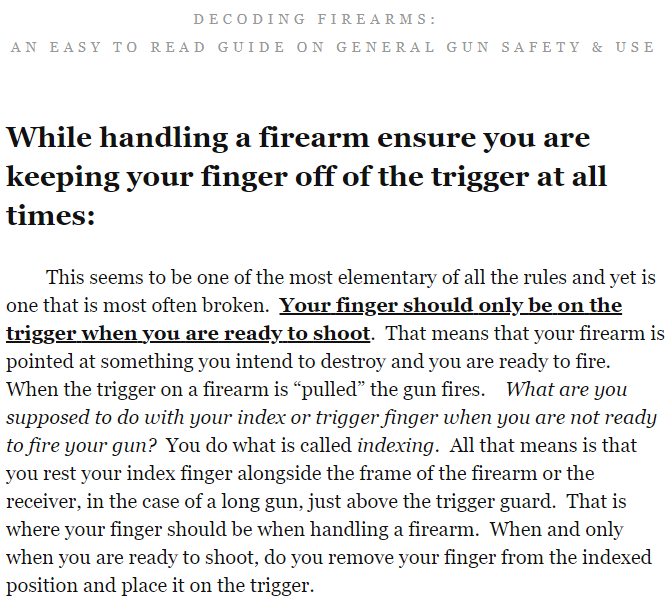 The excessive and redundant pointing out where the trigger
finger is supposed to go when dealing with people new to firearms came at the
cost of some hard knocks when working as a part time range safety officer (RSO)
at a public commercial range. While an
RSO I had the opportunity to cut my teeth on teaching concepts in short
informal bursts, but I also had the chance to experience some serious “pucker
factor” scenarios.

In one of the notable hairy situations I had to navigate, I
was working with a gentleman that needed assistance with going over how to load
a rental firearm. He said he had
experience shooting in the past, which has little bearing on how anyone should
approach someone handling a firearm.
Whenever I approached a customer that needed aid or the range deemed
needed aid, I would go over a quick and dirty of the three always rules. After my explanations, I taught the individual how the firearm
functioned. I received an affirmative
that this particular individual understood what we went over, asked him to show
me with an unloaded firearm, and then to proceed with live fire shooting. He did a fantastic job following my
directives and his practice run was without incident. I always stress that our brains are the
“master safety” when it comes to firearms.

The man loaded the firearm and then a moment later
“bang!” Just like that…he loaded the
pistol and it went off.

If you’re a customer that ever wondered why an RSO might be
acting like a helicopter parent, lording over your shoulder while they evaluate
your abilities during the first few shots, this is why. If you’re an instructor that may be
apprehensive to get right on top of a student or client, this is why you need to be.

The customer was shocked, turned towards me, and I
instructed him to place the firearm on the shooting bench pointed down range, I
was poised ready to take it from him if he failed to comply. I recovered the pistol from the bench,
dropped the magazine and obsessively compulsively ejected the live round by
racking the slide several times, placed the cleared gun back on the bench,
action open and facing up.

The man then pulled out of his index finger what appeared to
be a wire from a wire wheel and said “This is why the gun went off, this thing
stuck me in the finger…” I cut him off and curtly explained “The gun went off
because you had your finger on the trigger before you were ready to shoot.” The wire that stuck him in the finger, which
came from who knows where, caused him to flinch and so he pulled the trigger in
the process. To say his finger was not
on the trigger would be less than truthful.
He did try to double down and say “But, but, this thing…” and I shut
that down as politely and professionally as possible. The fact remains that the individual broke
one of the important safety rules.

When the firearm went off there was also a “ping” that
followed. The ping was the bullet
hitting a metal support stanchion that was situated down range in an area not
in front of one of the shooting lanes.
Luckily, no damage or injury was caused by this action of negligence,
and no ricochets came back at anyone.

If you’re a newbie, take this information, process it, and
really think about what it means. Be
sure to seek materials such as books, articles and videos from reputable
sources, and do take training from highly rated instructors. Also keep an open mind when working with
someone that is teaching you. Especially
if you feel crowded on a firing line, incidents like this are one of the many
reasons instructors will be right on top of you, in case they have to step in.

For you instructors out there, make sure you are explicit
with whoever you are working with. Even
if you are in an informal setting and not a certified instructor…lots of people
are taking friends and family to the range to learn how to shoot these days. Instill good habits into whomever you teach
to handle firearms, and do follow some sort of guide or book to aid you in
imparting this knowledge in proper gun handling and concealment. Be sure to
keep yourself close enough so you can immediately grab any firearm from whoever
is shooting with you if needed.

This story is a near-miss which could have resulted in bad
consequences. If we wanted to take a
National Travel Safety Board aviation incident report approach to this, we
could go on for thousands of words and many pages. However, the takeaway for all firearm users
in this quick talk format is to engrain in your mind that you shall not put
your finger on that trigger until ready to shoot. Specifically this means keeping your index or
trigger finger glued to the frame or receiver of the firearm above the trigger
and trigger guard. Not across the
trigger guard. Not hovering out in space
off the frame yet still away from the trigger.
Keep it planted firmly on the frame.
Imprint this action into your muscle memory by always doing this.