Do Guns/Speech Threaten The Ruling Class? 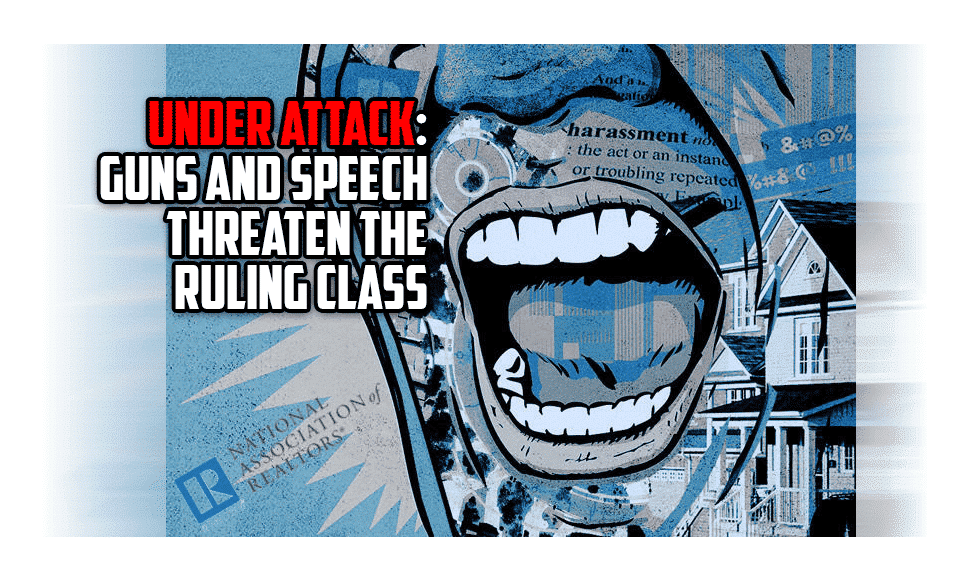 We spend a lot of time talking about how the
right for the common man to possess firearms enshrined in the Second Amendment
to the United States Constitution is for a citizenry to be truly free. But ask
yourself this question. If you possess firearms, but can’t even speak freely
without fear that you will lose your ability to function in society, are you
truly free? Of course not. Nothing threatens power-hungry leaders more than
armed citizens who are free to think and voice their minds. It should be no
surprise then that corrupt and inept government officials want to tell you what
you can say, think, and hold in your hands.

We were made aware of a disturbing change to
the National Association of Realtors’ (NAR) statement of professional
standards. How this is of any relevance to you requires just a bit of
explanation. The NAR has about 1.4 million members and is the largest
association of realtor’s in the country. Two NAR members with over 30 years of
combined experience as realtors explained that ‘without NAR membership and
access to the MLS (multiple listing service), you essentially cannot function
as a realtor’. The implications of the NAR changing its standards of conduct
without input from its members have far-reaching implications.

The concern to the realtors we spoke to was
twofold. First, the change broadened the scope of what constituted “a
REALTOR®’s activities” as listed on the organization’s
website. This is from the NAR’s website:

At present, Policy
Statement 29 in the Code of Ethics and Arbitration Manual limits the
applicability of the Code to real estate-related activities and transactions
involving REALTORS®. As such, members can engage in conduct and speech that is
discriminatory and abhorrent, but unless it can be tied to a real
estate-related activity or transaction, the Code of Ethics, specifically
Article 10, does not apply. The Board of Directors approved a revised
policy that expands applicability to all of a REALTOR®’s activities. While
the Code’s applicability has expanded, most Articles and Standards of Practice
remain specific to real estate transactions and other real estate-related
activities.

In addition to expanding the scope, the
realtors voiced apprehension as to the change in definitions of behavior that
would violate the code of ethics. This included the addition of the vague and
arbitrary term ‘hate speech’.

Here is what the NAR describes as conduct
considered ‘sexual harassment’ and the definition of ‘hate speech”:

gesture based on
another person’s sex, color, race, religion, national origin, age, disability,
sexual orientation, gender identity, and any other

Examples of harassment
include, but are not limited to: epithets, slurs or

negative stereotyping;
threatening, intimidating or hostile acts; denigrating jokes; and the display
or circulation of written or graphic material that denigrates or shows
hostility toward an individual or group based on a protected characteristic.”

Hate Speech: “speech
that is intended to insult, offend, or intimidate a person because of some
trait (as race, religion, sexual orientation, national origin, or disability).”

Epithet: “1a: a
characterizing word or phrase accompanying or occurring in place of the name of
a person or thing; b: a disparaging or abusive word or phrase”

Slur: “1a: an
insulting or disparaging

The realtors we spoke to said that now that a
post on their Facebook page, a conversation with a colleague could be taken out
of context and subject them to discipline or loss of their license. One of the
realtors we spoke to is a pastor. He said that he fears simply preaching from
God’s word could be a violation of the NAR’s definition of ‘hate speech’. He
provided this example:

Romans 1:26-27 26This is why God delivered them over to degrading
passions. For even their females exchanged natural sexual relations for
unnatural ones. 27 The males in the same way also left natural relations with
females and were inflamed in their lust for one another. Males committed
shameless acts with males and received in their own persons the appropriate
penalty of their error.

“He felt the need to qualify his
statement by saying “I would not treat someone who is a homosexual any
different than any other person.” Both realtors made a point to continuously
reaffirm that they do not discriminate against anyone in their personal or
professional lives. It is quite clear that the example above could easily be
considered prohibited speech according to their ‘epithet’ definition.

But let’s look at this from another point of
view. Under the current “hate speech” rules adopted by the NAR would
it be permissible for an atheist to condemn religious beliefs they found
objectionable? For example, could a homosexual post on their private social media
page that they wouldn’t talk to anyone of a specific religion, and found them
detestable because they believe that homosexuality is a sin? Our stance is that
they should be allowed to post that on their page. Even though it fits the very
definition of “hate speech” used by the NAR and in public discourse.

We should be very careful when we believe that
because public sentiment currently supports our beliefs, and not a different
belief that it will always stay that way. A brief look at history will show
that public opinion always changes over time. This is especially true if we
align our opinion to a political party’s. The “steadfast beliefs” of
politicians and their parties change with the wind. You may find yourself
cheering the removal of all types of “hate speech” because currently
what you don’t like is defined as “hate speech”. However, if the tide
changes, and what you think or say is considered “hate speech” would
you have the same opinion?

We asked the realtors if, over their 15+ year
careers, they have heard or been a part of actual acts of realtors committing
acts of racism or bigotry against anyone. One said she heard of an incident of
an “agent making a racist remark to a client several years back.” She
could not remember the outcome but believed the person lost their job. The
other realtor told us he had only personally been witness to a minority client
saying that he didn’t want to buy a house in an area because there were a lot
of [minorities of a different race than him] in the area.” He decided not
to work with the client based on the client’s behavior.

One realtor said, “I regularly have
clients ask me if I would live in a particular neighborhood. If I were to say
that I wouldn’t live there based on the level of crime, and it happens that
more of one ethnic group lives there, could someone infer that I am a racist? I
feel that at any moment what I say or put on Facebook will be twisted.”

Do you ever choose to support businesses that
are Christian-owned, veteran-owned, minority-owned, etc? You can also choose to
not support realtors who may have voted for the evil orange man or sleepy Joe.
Would you want to support a realtor who voted for someone who you think is
ushering in the end of the world as we know it? If that is important to you,
allowing people to expose their personal beliefs gives you the information to
make your decision on who you will do business with. Prohibiting people from
posting their personal beliefs does not take those beliefs from their hearts.
It just hides them from the public.

The realtors said they are required to
complete ethics training every three years as part of their continuing
education. Neither realtor said that they have ever been told that racism,
bigotry, or maltreatment of homosexuals was an issue amongst NAR members.
However the NAR’s statement on why the changes needed to be made paint a
different picture. Here is the statement which was taken from their website:

“During the
social unrest throughout the nation in late spring and summer of 2020, NAR
received an unprecedented number of complaints about REALTORS® posting
discriminatory speech and conduct online, especially on social media. Local and
state associations experienced a similar influx of these complaints. A local
association of REALTORS® wrote to NAR President Vince Malta requesting that NAR
consider the Code of Ethics’ applicability to this type of speech and
conduct.”

We are not claiming that the NAR is
fabricating their “unprecedented number of complaints”. However, the
justification for these changes seems to be driven more by social pressure than
actual incidents of violations of conduct.

Many have claimed that this is a violation of
their First Amendment Right to free speech. We should point out that the NAR
addresses this question of the 1st Amendment on their FAQ page. Their response
is technically correct:

The First Amendment
provides that neither the United States Congress nor any state may abridge the
freedom of speech of American citizens. With some exceptions, the First
Amendment does not prohibit a private organization from restricting the speech
of its members, employees, or users. NAR is a private association that is
supported by dues from members, is not exercising any governmental function,
and has no subpoena power or other powers generally available to state
agencies. As such, the First Amendment does not preclude NAR from imposing this
ethical duty as a condition of membership.

One realtor said they felt that the
long-standing statement of professional standards was adequate and provided the
appropriate ability to discipline their members. The new changes were
“overreaching and scarry.”

We take a stance that less governmental
control over private companies is always preferred. We also assert that racism,
bigotry, sexual harassment, or being a crappy human being, in general, is
always wrong. However, the purpose of bringing this to light is to say enough
is enough. People must be able to say and think what they want even if we
strongly disagree. The concerted effort to redefine words, control speech,
public expression, and opinion has hindered civil discourse.

We are asking that people take a step back,
and pause a moment. Let all the hysteria over which group you think is going to
cause the death of America as we know it. Think about the fact that people can
have different ideas and different beliefs and exist in the same country. It
may seem crazy, but people with different beliefs can even exist in the same
house! But only if we don’t look at people as just a bunch of beliefs, but as a
person. Let’s refuse to allow the ruling class to further divide us in
order to distract from their ineptness. We disagree with the precept that
censorship is the way to bring people together.

Over time, good ideas will always beat out bad
ideas. But this happens because we can discuss things civilly. Good ideas do
not need to stifle bad ideas to win in the end. Good ideas win on their merit.