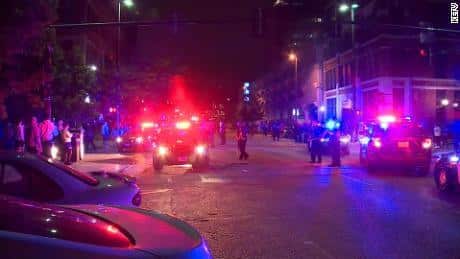 This week in Nebraska, Jake Gardner was indicted on 4 counts
in the shooting death of James Scurlock. The incident happened on May 30th,
during violent Black Lives Matter protests in Omaha.

Gardner and his 68-year old father were working in the bar
when rioters broke windows and committed other property damage outside the bar.
Scurlock was part of a large group that Gardner and his father confronted
outside of the bar. The group was told to move along. Video of the incident
shows of the members of the group being pushed by the Elder Gardner. Another in
the group is seen pushing the 68-year old to the ground.

The video continues showing Jake Gardner talking with
someone in the group about pushing his father to the ground. Surrounded by a
semicircle of rioters, Jake raises his hands about shoulder height and backs
away from at least three men walking toward him. In the video, Scurlock shoves
someone as the group walks toward Gardner.

After about 3 steps backward, Jake Gardner partially lifts
his t-shirt, exposing a handgun that is in his waistband. Someone is heard
saying ‘he’s got a gun’. The cell phone video ends, and a video-only
surveillance camera captures the actual shooting.

A female blindsides Gardner and shoves him to the ground.
Two people jump on Gardner as he is on the ground. Gardner is heard saying ‘get
off of me’ several times. After a couple of seconds of struggling on the ground
with the two individuals, he fires two shots that strike the ground. In his
interview, Gardner says these were warning shots.

The shots scare the initial attackers who run from the
scene. Scurlock then jumps on Gardner’s back and attempts to choke him. Gardner
points the gun backward over his shoulder and fires one round, striking
Scurlock in the upper chest.

Except for a few, the crowd disperses. Police officers
happened to be nearby because of the violent protests, and they reach Scurlock
within seconds. Scurlock ultimately dies from the single gunshot wound.

Gardner was initially taken into custody and gave statements
supporting his claim of self-defense. Statements from 60 witnesses backed up
the claim or did not disprove his self-defense claim. Even a protestor who was
interviewed said that Gardner had not said anything racist during the argument
with the protestors.

Douglas County District Attorney Don Kleine addresses
reporters, stating that evidence does not disprove Gardner’s claim that his
actions were reasonable and in self-defense. Kleine says that after
deliberating with investigators and other officials, there was a unanimous
consensus that Gardner acted in self-defense.

A lot has changed in three months, and Jake Gardner is now
facing 4 felony counts from the incident. Here is what we now know. The
investigation into the shooting never ended. This is not unheard of and is
quite common. Especially when there may be several more witnesses and video
surveillance to gather.

Franklin’s team gathered additional evidence and presented
it to a grand jury. The grand jury found enough evidence to support the
following charges: manslaughter, use of a firearm in the commission of a
felony, attempted first-degree assault, and making terrorist threats.

Franklin declined to comment on what specific evidence
tipped the scales against the self-defense claim. He only would say that by the
“time they made their decision,” Franklin said of the grand jury, “it’s almost
a slam dunk that they had much more information available to them than what was
had at the time the initial decision was made.”

Again, we do not know what additional evidence the jury
members had available to them. Some have speculated that social media posts
made by Gardner indicated that he may have a racial bias. Franklin made it a
point to tell those at the press conference that in his opinion, Gardner is not
being charged because he may or may not be a racist. Unfortunately, we do not
know what the evidence is, and this has the appearance of a prosecution driven
by public pressure rather than facts of the case.

It is hard to refute the claim that Gardner had a reasonable
fear of death or serious bodily harm at the time he pulled the trigger. But
this is a great example of how our actions leading up to the incident play a
massive role in how others perceive the reasonableness of our use of force.

All this being said, we do not have all the facts. We should
trust in the legal system, and hope that a just outcome is reached.