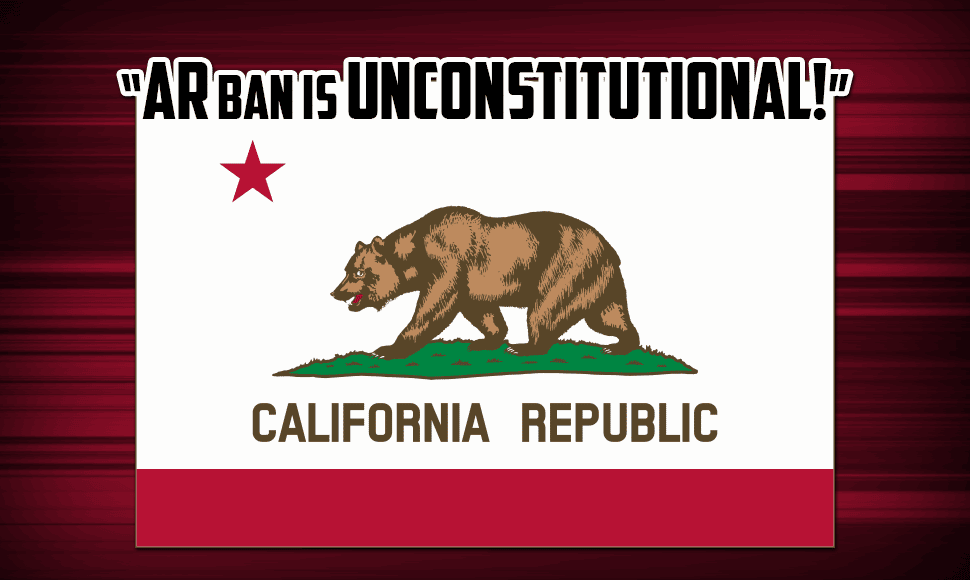 The 2019 case Miller v. Becerra, now known as Miller v. Bonta, has delivered a decision. The case sponsored by the Firearms Policy Coalition, Second Amendment Foundation, and others revolves around California’s prohibition on so-called “assault weapons.” In the original claims for relief, Miller et al. stated many things, among them:

“Plaintiffs Miller, Russ, and Peterson own firearms that are “AR-15 style firearms” that have fixed magazines as defined by Penal Code § 30515(b) and 11 CCR § 5471(n), (p). Said firearms are loaded and unloaded by using a device requiring the user to physically release and separate the upper and the lower receivers, in the manner described by 11 CCR § 5471(n), (p), before the magazines may be removed. Accordingly, these are not assault weapons as defined by statute.”

The complaint further asked of the Court in their prayer for relief:

“For declaratory relief adjudging that the definition of “assault weapon” pursuant to Pen. Code § 30515(a)(2) and (a)(5) is unconstitutional on its face, and violates the Second Amendment.”

On June 4th, 2021, a decision was rendered by the Honorable Roger T. Benitez, delivering the sought-after relief Miller requested. The opinion is a scathing piece of judicial work that makes short order of the blatantly unconstitutional provisions in California’s law. Eloquently stated in the introduction, Benitez said:

“Like the Swiss Army Knife, the popular AR-15 rifle is a perfect combination of home defense weapon and homeland defense equipment. Good for both home and battle, the AR-15 is the kind of versatile gun that lies at the intersection of the kinds of firearms protected under District of Columbia v. Heller, 554 U.S. 570 (2008) and United States v Miller, 307 U.S. 174 (1939). Yet, the State of California makes it a crime to have an AR15 type rifle. Therefore, this Court declares the California statutes to be unconstitutional.”

This decision is a massive win for freedom-loving Americans. While the decision is more than likely going to be appealed by the state and pushed up further through the court system, the record reflects at this time the unconstitutional status of California’s scheme. The entire decision, which can be read HERE, is a masterful work laying down that the Second Amendment is a civil right.

For too long, the Second Amendment has been treated as a second-class privilege in California and other states like New York, New Jersey, Hawaii, to name a few. Having another case decided on the side of freedom wind its way through the California court system and undoubtedly through the 9th Circuit court is a positive sign. The 9th Circuit has the reputation of having the most significant number of cases overruled by the United States Supreme Court. Much like the case dealing with magazine capacity, this case will too be SCOTUS bound. Second Amendment advocates can count on further appeals of this decision, as the likelihood of California just letting this opinion stay as is would be close to nil.

We need to give a hearty congratulations to all that worked on this case. While a 30-day stay is in effect on the orders of this decision to allow California’s Attorney General the opportunity to appeal, this is still cause for celebration. I’ll be watching how this case proceeds closely, but for now, I’ll leave you with this bit of wisdom from Benitez’s conclusion:

“Government is not free to impose its own new policy choices on American citizens where Constitutional rights are concerned. As Heller explains, the Second Amendment takes certain policy choices and removes them beyond the realm of permissible state action. California may certainly conceive of a policy that a modern rifle is dangerous in the hands of a criminal. Therefore, it is good public policy to keep modern rifles out of the hands of every citizen. The Second Amendment stands as a shield from government imposition of that policy. There is only one policy enshrined in the Bill of Rights. Guns and ammunition in the hands of criminals, tyrants, and terrorists are dangerous; guns in the hands of law-abiding responsible citizens are better.”