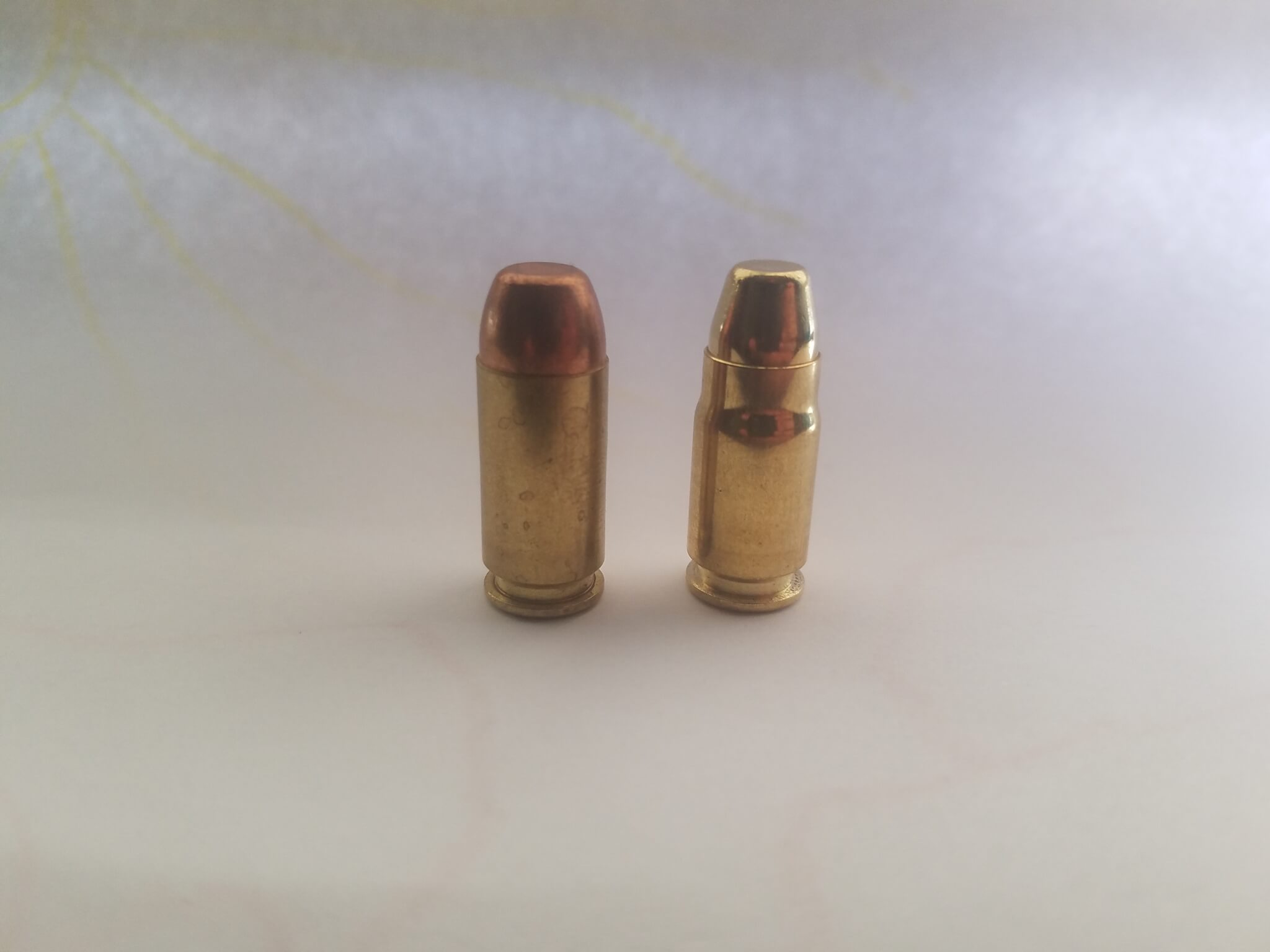 Many folks just coming into the self-defense world are bombarded with questions: which caliber do I choose? Which gun do I choose? Do I carry IWB or OWB? And the list goes on. We plan to help you answer all those questions, this time around, we’ll discus .40 S&W vs .357 Sig, two very capable self-defense cartridges.

In case you have never heard of the .357Sig, The Sig Sauer Firearms Company was asked back in 1994 by Federal to collaborate on a hot new cartridge that rivaled the venerable .357 Magnum in ballistics. The .357 Magnum is a rimmed cartridge suitable for use in revolvers but its design does not allow reliable feeding in a semi-automatic pistol.

So to combat this, they took the 10 mm cartridge (which debuted a few years earlier), necked down the casing to accommodate a 9mm projectile, and stuffed a 125 grain bullet in it. This combo resulted in a 125 grain bullet traveling at a velocity of about 1,400 feet per second. Thus the .357 Sig was born.

Why? Well, a couple of reasons.

You see the local police forces across the country were slowly replacing their trusty revolvers with auto loading pistols. The quest was to come up with a round they could depend on when the chips were down. They needed to be able to shoot accurately and have enough punching power to take care of business. This is also long before we had the high tech bullets available today.

This flat shooting, hard hitting, and accurate cartridge would be adopted by several major law enforcement agencies over the next two decades. Up to and Including the federal air marshals and Texas rangers.

The .40 S&W has been around a little longer and also got its life from the venerable 10mm, this time the case was just shortened. It has been adopted by many state and federal law enforcement agencies and in fact, at its inception the Federal Borough of Investigations actually went to Smith & Wesson with their own specifications for what they wanted in a pistol cartridge.

They based their cartridge on reduced recoil 10mm loads. Smith & Wesson shortened the length of the casing to reduce the airspace and found they could utilize the new cartridge in retro fitted medium framed 9mm handguns. The result was a 180 grain jacketed hollow point traveling at about 980 feet per second. This met all the FBI requirements based on the testing they did simulating typical environments in which their agents could find themselves. It therefore exceeded the tried and true performance of the previous standard issue .38 special +p rounds.

Created by the FBI specifically for law enforcement, the .40 S&W has been called “The perfect cartridge” for personal defense.

So why didn’t law enforcement agencies and concealed gun carriers all across the country just adopt the .40 S&W and call it a day? Why the need for the .357 Sig? What does the .357 Sig have that the .40 S&W doesn’t?

If you want to look up the ballistics of various offerings from several manufacturers, be my guest. There is a ton of information out there comparing different load formulas. The bottom line is, if you are going to be in a situation where you need to reach out a little farther, the .357 Sig has more accuracy at longer ranges. It also retains energy at those longer ranges so it hits harder at 100 yards than the 9mm does at the muzzle. I could see why some law enforcement agencies out West would more likely be in an altercation requiring additional range than a city police officer back East.

The .357 Sig has better penetration through barriers.

In a situation where a law enforcement agent would have to bust through a windshield or car door, the .357 Sig has performed better in these tests. In some cases substantially better.

The tapered shape of the cartridge is perfect for feeding from a magazine in a semi-auto pistol. You don’t want your everyday carry to jam during a life and death encounter.

So with all this going for it, why doesn’t everyone chuck the .40’s and switch to the .357 Sig? Because no cartridge is perfect.

The .357 Sig is more expensive to shoot.

Personally, I am not sure if it is the necked down casing or the lack of popularity that is driving the cost, but the .357 Sig costs roughly twice what .40 S&W ammunition does. It is also a little harder to reload. When your average shooter is picking his every day carry, he needs to take the cost of practice into consideration. Government agencies may not have the same litmus test when deciding with which cartridge they are going to equip their officers.

The .357 Sig has more muzzle blast and report.

When a 125 grain rounds comes out of the muzzle at 1400 feet per second, it creates a huge flash and a big bang. For us veteran pistol shooters that might be just part of the fun. For a beginner shooter or a rookie officer it might lead to less practice or the beginning of a bad anticipation problem.

There is also the issue of over penetration.

The ideal man stopper will use all of its energy in the intended target and not pass through. A round that passes straight through does not maximize the expansion and shock that a slower, heavier round does. The .40 wins in this category. It has been proven over time that the .40 S&W is superior as a one shot bad guy buster. The .357 sig is more likely to go through the home invader, through the kitchen wall, and into your neighbor’s house.

There is also some argument as to which one has more felt recoil.

They are very similar in this regard. Both are fairly snappy if shot from similar firearms. For this shooter it was always to close to tell. The excess muzzle blast from the .357 Sig may make you think it is kicking harder but not by much (if at all).

So you see both rounds are good rounds. With today’s modern ammunition you can find bullets specifically designed for personal defense, target practice, or even hunting. If you are thinking of picking either one of these, you need to weigh them for yourself and decide which one will suit your purpose.

The cool part is that both rounds come from the same initial casing. There are conversion kits that can easily change your existing Glock 32 or SIG Sauer p320 chambered in .40 S&W to .357 Sig and vice a versa. This could give you the chance to try out both and see which one you like without the full expense of another pistol. Modern magazines for either one should feed both types of rounds but be sure to check with your manufacturer.

Whatever you choose, you’ll likely need a holster to put it in, and we’ve got the perfect leather gun holster for you, right here.