“Why Do I Need Training?” 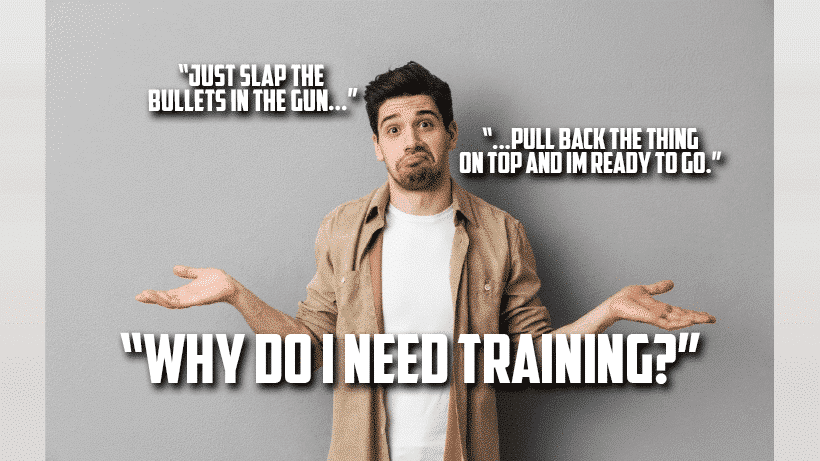 I’m blessed to have friends and colleagues from all walks of
life. With that comes different political views and perspectives. I have differing opinions from many of those
that I connect with personally. To be perfectly honest, we can communicate reasonably
and agree to disagree on those subjects we don’t see eye to eye. Firearms are a hot-button issue, which they
should not be. The polarization and
politicization of our inalienable rights to keep and bear arms have created a
rift in The United States.

One recent conversation I had with someone that is not
“into” firearms (or many things I am politically into) was reasonably
pleasant. We just talked. It was more than cordial, and several times
throughout our meanderings through different subjects, things like “Oh, I did
not know that” were said. I took the
opportunity to state facts plainly versus feelings. I pointed out where things go south with our
media and even drew from studies funded by anti-freedom organizations that had
findings consistent with pro-freedom groups.
Topics like mass shootings were discussed. The number of so-called “mass
shootings” has gone down over the years, but the media coverage has gone up.

I do discuss polarizing things with another friend. He happens to be from Australia, where the
gun culture is much different than that in The United States. While the gun-owning population there can be
somewhat akin to that of the US, the overall population seems to take a more
centralist, if not a prohibitionist, view on the subject of arms. When these silly things like facts get
brought up, most of them are seemingly dismissed by him, reverting back to
“feelings.”

Enter stage left: COVID-19.
The COVID-19 pandemic and different levels of civil unrest in the United
States have led to astonishing numbers of new gun owners. With numbers of new gun owners hovering
around over 8 million at the time of writing this, it is safe to say the American
gun owner’s landscape is shifting. On
more than one account, I’ve reported the repeated
numbers of people in my circle that have approached me on the subject of firearms. My friend from down under is no different.

“Hey, what do you think of this, buddy? I bought a pistol.” My friend said in his Aussie accent. To which I said, “That’s great, bud. What made you decide that?” He continued, “Well, with all this crazy
stuff going on with the ‘Rona, and people acting out like they are, I figured I
needed to get some protection.” We
chitchatted more. I asked him what kind of pistol he bought, and he told me the
make and model, and that decision was based on the fact it was the cheapest one
he could buy at the store. I then
prodded him to find out if he would get his CCW in Florida, where he resides,
to which he said “no.” I was perplexed
by the notion that he was scared for his safety but not thinking several steps
ahead and why having a CCW would benefit him.
After all, civil unrest and the “crazy stuff” that was happening from
“the ‘Rona’” is what pushed him to make this decision. To each his own.

I then prodded him about training and if he was going to get
some. To which he replied, “Ah, what do you
mean I need training? I know what I
gotta do. I put the bullets in the clip,
slap it in, pull back the thing on the top, and I’m ready to go.” He said this very matter of factly as if he
were nonchalantly throwing some shrimp on the barbie (I jest). I sighed.
I pointed him in the direction of some resources that he could read at
his leisure, and fear my advice fell on deaf ears.

We can have political divides and differing opinions. There is nothing wrong with having a
different viewpoint. As noted earlier,
one person I can talk with is open to at least hearing the facts, indicating
that they were not aware of them. In the
latter case, my Aussie friend is more dismissive to contrary views on certain
subjects, guns being a big one. Don’t
even dare talk poorly about “the Queen.”
What is not negotiable, as well as being apolitical, is the subject of
gun safety. Is my friend’s political
stance a reason for his aloof view towards being trained in firearms? No, not necessarily. But this dynamic, no matter what side of the
political divide one is on, seems to fit the bill for anyone that exhibits a
level of arrogance. In a past article, NEW
FIREARM USERS COMING OUTTA THE WOODWORK – “WHAT IS THE BEST GUN TO BUY?”,
the two people being discussed were both staunchly conservative. There is nothing negative about that. However,
one person adopted what I consider a good mentality, and the other subscribed
to a mentality I would not. Ignorance is
blind to political affiliation.

In my opinion, people that subscribe to the “just slap the
bullets in the gun” or “this is what so and so told me to get, so I’m gonna”
mentalities are dangerous. Entering into
the world of firearm use and ownership comes with great responsibility, and
thinking needs to be done. Beyond thought,
actively training and practicing with your arms needs to be done. If you’ve decided that exercising your Second
Amendment right is what you want to do, do so in an educated manner. Seek
good and proper training and build on that with practice and your research. To borrow a phrase from my friend from down
under, when it comes to guns, you can’t just “shut up and chop wood” – that is, get the job done without thinking.

Since writing this, I asked my buddy about his pistol
again. He said he has yet to make it to
the range, although he would like to.
But then followed up by saying, “Well, this ‘Rona stuff is almost behind
us, so I don’t really need it anymore.”