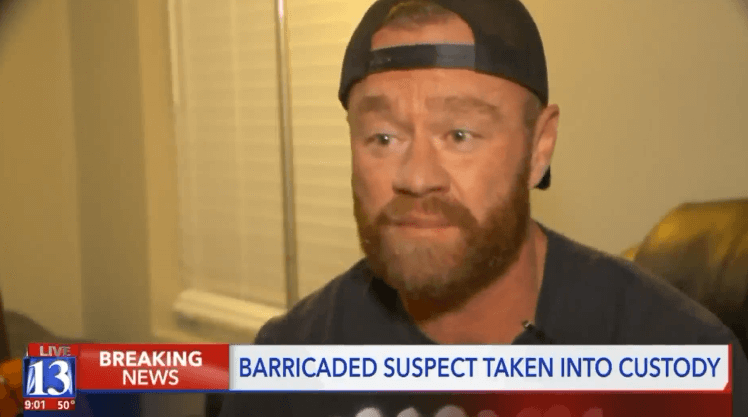 Millcreek, Utah — A man punched a child, fired his gun at the kid’s father, and then barricaded himself inside his home in Millcreek, Utah. The man, being identified as 61 year old Richard Lindem, has been arrested and is facing some pretty intense felony charges.

According to police, the man was angry that two kids were riding their dirt bikes in his neighborhood on Doreen Street. He then allegedly confronted a 6 year old boy, punching him several times in the head. The boy’s father, Chris Ollerton, intervened shortly after that.

Then, after Ollerton confronted the man he pulled out his gun and pointed it at the boy’s father with reports stating that shots were fired. In the video, the father and the two kids can be seen running away.

The father had this to say about the whole ordeal:

“If he wouldn’t have pulled the gun on me, I would have tackled him and beat the crap out of him. He full-on pulled back and hit my kid, like he was a man – full on punched him,” Ollerton said. “That’s something you don’t want to see, as a father you want to protect, you know?”

Ollerton also said he went into the ordeal thinking he was going to “smash this guy” and that “you can’t do that to a child.” He changed his thoughts when the man drew his gun and started shooting.

The father told the boys to run home and call 911.

At around 5:15pm., a gunshot was heard from inside the home, and a few hours later, SWAT made a forced entry into the barricaded house and arrested the suspect. Police made several attempts to approach the barricaded man over the course of about six hours.

The man faces a misdemeanor charge of reckless endangerment and felony charges of child abuse, aggravated assault, and discharge of a firearm.

If there is one thing this story tells us, it’s that you should always expect the unexpected and to carry your gun on you at all times, to include in and around your home.